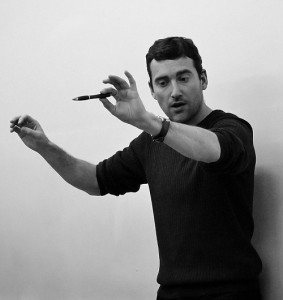 Michiel Haspeslagh (°1982) was a singer in Clari Cantus from its beginnings in 1989, and shortly thereafter became head-chorister in the Gregorian boys’ choir ‘Koristen van Keizersberg’. During his studies of bassoon and voice at the Lemmens Institute his special love for both solo and choral repertoire became clearer. He quickly became a regular singer in such groups as Currende, Ex Tempore and the Goeyvaerts Consort.

Since 2008 Michiel has been a freelance tenor in the Flemish Radio Choir, Currende, Psallentes, Studium Chorale (Maastricht) and the Orpheus Vokalensemble in Germany. He also lends his talents as a singer to Nunc, a professional  theatre group that specializes in exciting combinations of contemporary drama and music.

At the beginning of 2010 Michiel’s mother, Ria Vanwing, passed on the ‘Clari Cantus torch’ to him. Under his direction the youth choir won the coveted ‘Choir of the Year’ award, a fitting reward for the accomplishments he made with the choir. The performance of John Rutter’s ‘Requiem’ in St Peter’s Church in Leuven in 2012 was another musical highlight. Michiel teaches at the Zaventem Arts Academy. With his refreshing approach, knowledge of the voice as instrument, and a solid basis in performance practice, he is increasingly in demand as choir conductor. This has led to a number of new collaborations: since October 2013 he has conducted the ‘Personnel Choir’ of Bozar in Brussels, and since December 2013 he has been the artistic director of the Carmina Kamerkoor in Meise. In August 2014 he added the Brussels chamber choir Bruxell’A Cappella to his activities.