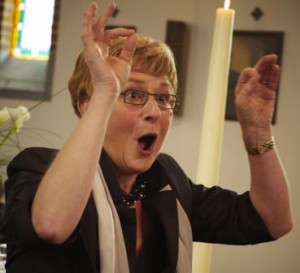 During the first year of her studies at the Lemmens Institute in Leuven, Ria Vanwing (°1952) became the conductor the youth choir ‘In Dulci Jubilo’ in Herk-de -Stad, her birthplace. She later also became a music teacher in the town, a vocation she enthusiastically pursued until 2010.

Happily responding to the need for a training choir, in 1972 she founded the children’s choir ‘De Jubilootjes’. Under her direction both choirs were among the best in Flanders over the 18 years that she led them.

Singing and making music with children has remained her passion up until today. After some 45 years Ria continues to combine her great enthusiasm with a solid pedagogical approach. The results can be seen in the splendid track record of her children’s choir Clari Cantuli and the mixed youth choir Clari Cantus, the latter now under the direction of her son Michiel Haspeslagh. She founded the two choirs in 1989 and 1990 respectively, in Kessel-Lo near Leuven where she now lives.

Ria leads choral workshops, gives lectures and masterclasses, and sits on juries. She has also given soloists from her choirs special training for roles in large-scale symphonic-choral compositions for both concerts and CD recordings, including appearances with such ensembles as ‘Capilla Flamenca’, ‘Il Fondamento’, and the Flemish Radio Choir and Orchestra (now the Brussels Philharmonic). Her enthusiasm for teaching and conducting has led her to compose and arrange music for both equal voices and mixed choir.